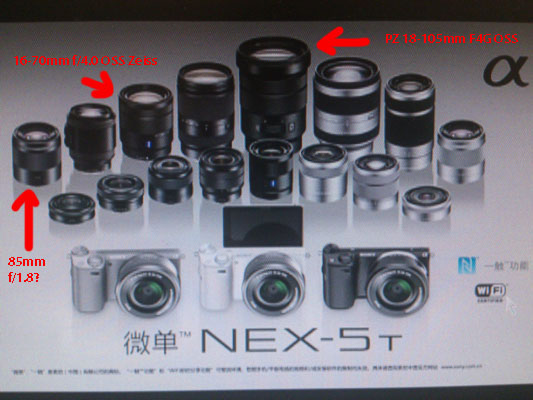 As Sony gears up to launch their next generation NEX-5T camera next week, images posted on Sony Alpha Rumours gave us a sneak peek at the device.

The NEX line was launched in 2010 and combined the simplicity of point and shoot cameras with high performance changeable lenses. The NEX-5T range will offer a new camera body as well as several new lenses shown in the leaked photo.

The image reveals that the device will be available in at least three colour schemes; grey, white and black and that new lenses added to the range will include the E16-70ZA and the PZ18-105G.

Sony Alpha Rumours also reports that Sony will announce the release of another camera, the ILC-3000 which will include a 20.1 megapixel sensor and will retail at around £300.

While Sony’s announcement is believed to be coming next week, the exact date has yet to be confirmed by industry insiders.

Pressy adds an extra button to Android phones
Crowded funded startup company Pressy has developed a programmable button that can be added to Android smartphones via a headphone jack.
Accessories - Alan O'Doherty