First Look: Deus Ex The Fall – pretty like a FOX! 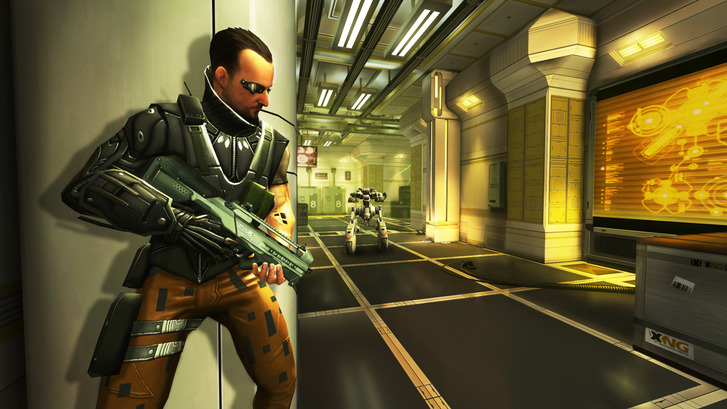 If you were still wondering about the eventual mobile dominance of, well, everything, the shift of role playing games (RPGs) from PC to tablet could be seen as one of the signs of the impending mobocalypse.

The brilliant Knights of the Old Republic has been ported to iPad and now Square Enix, Eidos and N Fusion are offering a new instalment of the role playing game for PC and PlayStation for iPad, Deus Ex: The Fall coming this summer for £4.99.

The mobile version of the game has been designed as a ‘next chapter’ in the story, not as a port or a derivative, Square said, and the story is set in the same year as Human Evolution and uses characters from the Deus Ex novel ‘The Icarus Effect’.

Having not played Deus Ex previously (I know, I know), the mobile version was my first entrance into the world but the story line is pretty familiar: a British ex-SAS mercenary has been betrayed by his private military contractors and must go into hiding, while also trying to uncover the conspiracy surrounding the supply of drugs necessary for the welfare of humans with special abilities, or “augmented” humans.

The game has been in the works for 12 months and features many of the same voiceover artists as the game, Square said.

But let’s get down to business.

What Mobile took a first look at the game at a press briefing, playing through the first tutorial chapter as well as a demo from some of the Square team. And we gotta say, this game looks  good.

Graphics-wise, the figures are pretty blocky but the backgrounds are rich and the  action is whisper smooth, particularly for tablet touch screen controls which can be a bit sticky; and since the game has been described as a ‘nanopunk/cyberpunk-themed action-role playing video game with first person shooter elements’, this is ultra important – gameplay needs to be smooth, without lag, for the game to work on any action level; head shots bain’t gonna work if your device refuses to scroll up in time.

The game features rolling thumb controls or tap to move; both are easy but the rolling thumb was (obviously) the most impressive, with smooth movements and sensitive response.

As an RPG, you can of course interact with other characters, pick up side quests and have non player characters react to your presence (like waving a gun around. That’ll attract attention all right).  Characters had some pretty stock responses but then, I’m not sure you can get all that witty with a drug cartel’s henchman (but wouldn’t it be fun?)

In terms of action, ‘augmentations’ or special skills have been expanded, with 24 in total, including some old (glass cloaking) and some new (stealth dash).  What I quite liked about the game is you have the option to perform take downs (removing a character from play) by either killing them or using non-lethal means.  Sho nuff, if they aren’t Sith, I’d be inclined to go for non-lethal, considering the lethal take down sequences are pretty brutal. I’m not sure how head shots work in this respect, however…

You can choose auto targeting if you wish and you no longer need to press to run, with jumping replaced with vaulting, in order to make the game work better on a tablet. A few other tablet/computer differences are that bodies disappear from on-screen after a given amount of time and you can pick up unlimited guns (“Thank GOD for red necks!“.

Auto targeting worked well on the tablet although it feels a bit like cheating; self target proved a tad painful however, with the cross hairs lined up, but the character not going down.

Orders to enter stealth mode, crouch and proceed under cover showed no lag in character response, and the tutorial sets you up pretty well with the game play which is fairly intuitive anyway.

The game runs as a premium, which means you can play and unlock levels without putting money in – however there are options to make in-game purchases.  A campaign playthrough takes roughly five to six hours, Square said, and you’d need to play through about three times to see all the game’s content.

The game is available on iPhone 4 and above, iPod Touch (5th generation) and above, and iPad 2 and above, including Mini, with no dates as yet for an Android release.

Foursquare for Android gets dedicated tablet-UI, iPad left out
Foursquare has released a tablet-centric UI for Android, in stark contrast to the usual norm for iPad-first development.
Apps - Jordan O'Brien
UPDATED: BBM NOT coming to Android and iOS on June 27
Android and iOS users only have a little longer to wait for Blackberry Messenger, with it due to hit their respective app stores on June 27, according to T-Mobile.
Apps - Jordan O'Brien

Is BlackBerry aiming to pre-install BBM on Android smartphones?
Word has it that BlackBerry is aiming to see its popular BlackBerry Messenger service come pre-loaded on some Android handsets.
Apps - Alex Walls