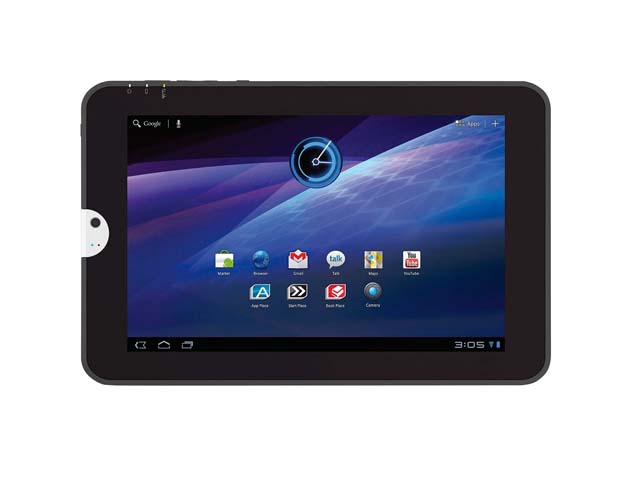 Toshiba is no stranger to Android tablets; in fact, it’s been in the game longer than Google itself. Google’s own tablet-optimised operating system, Android 3.0 ‘Honeycomb’, was not released until earlier this year. Like Samsung with the Galaxy Tab, Toshiba chose to jump the gun and release a tablet using the open source OS meant for phones, in late 2010.

Samsung’s effort met with respectable reviews and shifted millions, but Toshiba’s effort, the Folio 100 had a troubled debut. It shipped without Adobe Flash; it lacked Google’s official apps including the crucial Android Market; return rates were so high that Dixons and PC World pulled it from sale. Toshiba went back to the drawing board with its tail between its legs.

So it’s with some hesitancy that we come to the Toshiba AT-100, a follow up with Google’s blessing and Honeycomb operating system (Android 3.1), a 1GHz NVIDIA Tegra 2 dual-core processor, 1GB of DDR2 RAM, a 10.1-inch finger friendly capacitive touchscreen and a pair of cameras: a 5-megapixel shooter on the back and a 2-megapixel sensor on the front for video chats.
Oh, and a great, thick 15.8mm slab of a profile you could clobber someone with for an instant KO.

Let’s kick off with that expansive frame. There are no buttons on the front of the device: Honeycomb moves the home button to the bottom of the screen itself as a software key. The device feels substantially heavier than the 756g it tips on the scales. That’s partly because it’s almost twice as thick as an iPad 2, and the ridged rubber backing doesn’t flatter either: it’s reminiscent of an enormous swim float.

It didn’t have to be this way. But then, Toshiba didn’t have to include such a large array of ports, or a removable battery either. Prise off a flap on the side and you’ll find a micro USB port for mounting on a computer, a full-size HDMI port to connect to a TV, and a full-size USB port, for plugging in a USB flash drive, mouse or keyboard.

And there’s another great big boon of this girth: potentially enormous removal storage. On the side of the AT-100 you’ll find a full-size SD card slot (not micro) and better yet, it supports SD, SDHC and super high-capacity SDXC cards, meaning you could keep an extra 128GB of data inside the tablet, on top of the 16GB of internal storage it comes with. It’s a far cry from the Motorola Xoom Honeycomb tablet and its microSD card slot that wasn’t even activated.

Sadly, charging a blighter this big is beyond the powers of a regular micro USB juicer. Instead, you get a dedicated charger and it’s huge – you won’t want to carry it around with you. We expected more than seven hours of video on a charge, too.

In terms of features, we came away rather disappointed with the sound and image capturing qualities of the AT-100. We expected beefier sound from something so big, but the AT-100 is as tinny as the iPad 2’s tiny speakers. Five-megapixel stills also came out flat and speckly in anything other than optimum light conditions, although a tablet is hardly as convenient a camera as a smartphone can be.

To be fair to Toshiba, it’s added a few useful services on top of Android Honeycomb itself. Its file manager is exemplary, letting you browse through all the folders in internal storage, as well as mounted USB and SD cards. Better yet is the combination of a DLNA media app for streaming video and music to smart TVs over the air, and an Acetrax movies-on-demand service tucked away inside the Toshiba Places media hub, which lets you watch brand new release films, Apple iTunes-style.

All Honeycomb tablets currently use a HD-quality 1280×800 resolution, and the AT-100 is no different. Although Toshiba says is Resolution+ upscaling technology is at work, any improvement in clarity is offset by a slightly washy colour. It’s just not easy on the eye in quite the same way as the IPS panels on the iPad 2 and Asus Eee Pad Transformer Honeycomb tablet.

Still, that 10.1-inch display gives you lots of space to sit widgets on the Honeycomb home screens, and type at reasonably fast pace – capacitive technology means fingertip touches are registered without fault.

Performance is to be what’s expected from a Tegra 2 chip on Honeycomb – exactly the same as on the Motorola Xoom, in other words. Apps load quickly, Flash runs smoothly and HD video looks great, and you’ll rarely find cause for stutter.

There’s the problem, of course: this is the same experience as on other Android tablets. Multitasking is fluid, and we absolutely love the notification tray in the bottom right hand corner which quietly collects all your updates for you. But you can get this on rival devices, and we miss some of the tweaks other manufacturers have made, like Asus’s excellent keyboard with its extra row for numerals. If you can live with the chunky design in favour of the connectivity and storage options, the AT-100 has merit but it can’t help looking like the fat businessman in the kitchen at a house party…

Toshiba’s first Android tablet effort was a huge misfire. By adding ports galore and Google apps, the Toshiba AT-100 tablet is a big improvement, but that still means it’s merely mediocre. The device is just too big to be practical.

More Stories
Mobile game reviews – December
By Jon Mundy A selection of the highlights from the world of mobile gaming across the past month. Max Awesome 69p on Apple iOS Chillingo Make like Evel Knievel in Chillingo’s colourful motorbike stunt-’em-up. Max Awesome requires you to jump, duck and somersault your way through each obstacle-strewn course, with a mixture of style and […]
Reviews - Allan Swann 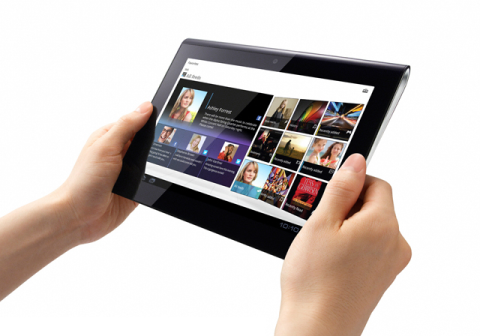 Sony Tablet S review
It’s unusual for Sony to arrive late to the party when new technology is concerned. Blu-ray and 3D TV saw Sony on the starting line and the Sony Reader arrived years before the Amazon research and development lab put the Kindle on the drawing board. The Tablet S is the first tablet from Sony and […]
Reviews - What Mobile 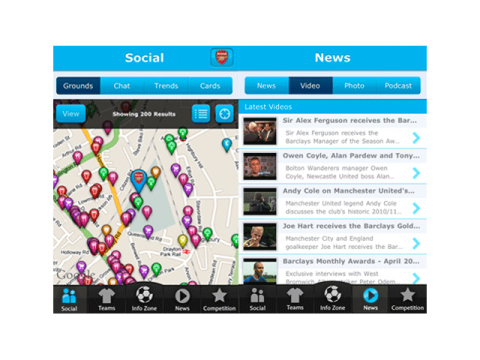 Barclays Football: App of the Month
With the Premier League season now under way again, it’s no surprise to find a bunch of football apps clamouring for a space on your smartphone home screen. Barclays’ app carries clout, given that the bank is the league’s official sponsor.
Reviews - What Mobile