All screens bright and beautiful, all features great and small, all things wise and wonderful, is LG’s best of all?

Everything needs a hook these days, and at first glance the LG Optimus Black is about as nondescript as you can get. No dual-core, no HD output, an old version of Android, plus a casing that’s as basic as anything we’ve seen.

Is there any point in continuing with the review?

Well, yes, because LG has produced the phone equivalent of a Q-Car. A phone that hides below the radar and comes alive when you power it on, leaving everything else for dead.

Okay, so that’s perhaps a bit of an exaggeration, but when you turn the phone on, the screen is going to make you, and others, go ‘wow’. LG makes the Retina Display for Apple, so after presumably allowing for some sort of exclusivity agreement to expire, LG has been able to use its incredibly bright display technology in a phone of its own.

Unfortunately, at a resolution of only 480×800 pixels on a 4-inch screen, as against 640×960 pixels on a 3.5-inch screen it isn’t as sharp, but boy is it bright. LG calls this screen a ‘NOVA Display’,  which gives it something to compete against the iPhone 4, Sony Ericsson’s ‘Reality Display’ and Samsung’s Super AM-OLED Plus screen.

LG states that the brightness of the screen is 700 nits. The word ‘nits’ refers to a unit of luminance equal to one cendela per square meter. If that sounds as confusing to you as it does to us, LG states this to be far higher than anything from the competition. Although unlike the world of televisions and monitors, this is a little more than most people would think about when comparing one phone against another.

There’s a risk the phone industry will get carried away with the use of these terms to differentiate in the future, like it has with megapixels before and processor speeds and cores now. But, whatever happens, the Optimus Black screen looks awesome.

The phone only comes with a single-core Qualcomm Snapdragon 1GHz processor, which is still more than adequate for the majority of usage – even if some of you may have already stopped reading after seeing the word ‘single-core’. In my review of the dual-core Motorola ATRIX, I revealed that in most cases the phone ran with a clock speed of 300MHz or less, so all-out power isn’t as important as you think, any more than needing 12-megapixels to take a photo to share on Facebook, for example.

What’s most important is that the phone works smoothly when navigating around apps, changing screens or viewing new notifications. The phone never pauses or lags, which isn’t surprising given the fact that until we got the dual-core handsets, the Snapdragon processor was considered the best of the best. Given the latest version has a far more powerful graphics co-processor, it still does well in the benchmarking stakes, even if the dual-core Optimus 2X does leave it standing.

The phone may not look all that special, but it’s very thin. At 9.2mm thick (and only 109g – which makes it one of the lightest smartphones on sale anywhere), it’s thinner than an iPhone 4 and not far behind the Sony Ericsson Xperia arc or Samsung’s Galaxy S II. Despite its diminutive size, the phone still manages to squeeze in a 1,500mAh battery.

There’s another nice feature on the front, in the form of four touch-sensitive action buttons (menu, home, back and search) that change colour when pressed. This makes it easy to tell you’ve pressed a button if you’ve turned off the haptic feedback.

The camera is good too. Very good, in fact. Although only packing a five-megapixel sensor, some sensors are better than others and this is one of the good ones. Over the years, LG has produced a number of good cameraphones and the Optimus Black gets nice results, which are sharp and well exposed. The tiny LED lamp on the back is also powerful enough to give night-time shots that really surprised me for their overall brightness, colour accuracy and lack of noise.

What’s more, there are a number of camera options available – from the focus options to features such as beauty shot (softening and improving skin tones) to panoramic and cartoon modes. The phone can also record HD video at 1280×720 pixels.

Like most phones today, there’s no camera button – so you’ll need to use an on-screen shutter icon to take photos or start a video recording, but you can fire up the camera without having to unlock the phone using another clever feature hidden away on the device.

On the left hand side of the handset, below the volume keys, is an easily missed button with a ‘G’ written on it. The G stands for Gesture and when pressed it allows you to do clever things by moving, or shaking, the phone.

Many options are disabled by default and can be controlled via the gesture settings menu. These include holding the G key on the unlock screen and shaking the phone up and down to open the camera, making it much easier to quickly take a photo when the phone is in standby.

There are a number of other things you can do, such as holding the G key and tilting the screen left, right, up and down to scroll around a magnified picture or website. Some of the features are, to be honest, rather pointless – simply replicating what you could do with more accuracy by sliding your finger around the screen – but some of the ideas are excellent.

Without even having to hold the G key, you can set the phone to do things like skip music tracks by tapping the phone on the left or right, or do the same to move the cursor left and right within a text field. You can also set the phone to snooze the alarm or pause video playback when flipped over.

For a phone that didn’t look all that special at first, the Optimus Black is full of surprises. Even the home screen, with an app folder that can show apps by category, alphabetical text list or an iPhone-like page-by-page format, is enhanced to show widgets, shortcuts, folders and wallpapers in a nicer way. You can also change the system font, while for power saving purposes you can not only enable automatic brightness, but also choose between maximum power saving or a new mode called optimised brightness. This thoughtfully enhances the contrast even with the brightness turned down.

There has been a lot of attention to detail on the phone and it shows, which only makes it more frustrating that so many people will be put off by the exterior. Mind you, if you’re going to buy a case to protect the phone, nobody will see it, so perhaps this isn’t as big an issue after all.

The Optimus Black isn’t as technologically advanced as its bigger brother, the dual-core Optimus 2X, and you will miss out on getting an HDTV output, but this is the cheaper option and not everyone wants to hook up their phone to a television, of course.

What LG has produced is a decent effort that is probably more exciting than the 2X, as well as being smaller and cheaper. However, in the grand scheme of things, it’s only really just above average and the similarly specified Sony Ericsson Xperia arc still has an edge, given its even better camera, HD output and a much more stylish look.

The Optimus Black has a subtle design that could be seen as rather forgettable, but if you owned this phone you probably wouldn’t be too concerned by its looks. Turn the phone on and the extra bright (and we mean bright) display really brings the phone to life. It’s also fast, making us wonder what all the fuss is about when it comes to dual-core processors. LG has included a clever gesture button that allows you to perform certain tasks by simply moving the phone. Throw in a decent camera and you get a good all-round package, but it may not be enough for everyone. 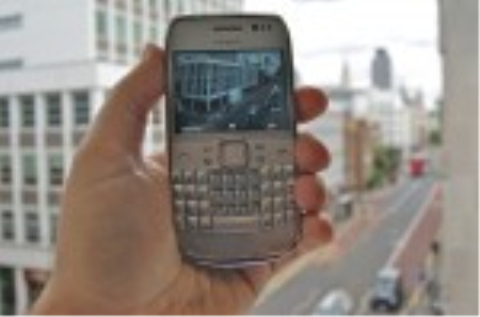 HTC Wildfire S Review
All consumers really want is a compact, attractive device with a decent OS and powerful features at a low low price. Could the HTC Wildfire S be the answer to their dreams?
Devices - Jonathan Morris
Motorola ATRIX Review (Part 2) with accessories
Having now had the opportunity to properly test out the ATRIX, including the range of accessories that sets this handset apart from the competition, it is now possible to conclude the review of this rather innovative smartphone.
Devices - Jonathan Morris