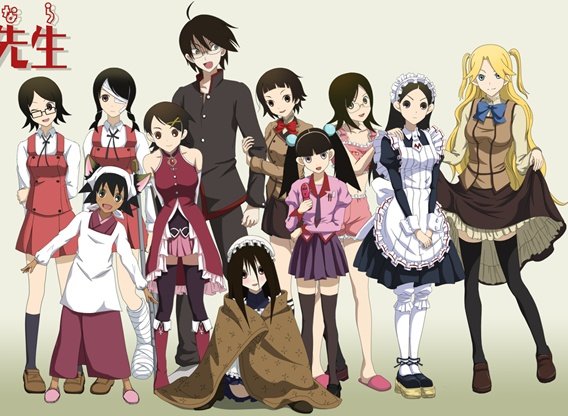 The world is currently going through a severe health crisis, which means that everyone must stay at home for the benefit of public health and safety. While lying down in bed all day waiting for this season’s anime to update can be a bore, there are undoubtedly old gems that continue to compel viewers around the globe. Nothing sparks a fully completed series that leaves you with plenty to think about, after all.

The mid-2000s was a transition period where anime production studios and manga authors explored a variety of art styles and incorporated deeper meaning in the guise of comedy. As a result, you will find a good number of highly-acclaimed series that continue to spark discussion on theories, speculation, and analyses today. Zetsubou Sensei and HaruhiSuzumiya are some mid-2000s wonders that still boggle viewers’ minds with psychological nuances and hints of dark comedy. These masterpieces are the perfect accompaniment to keep you laughing and thinking amid lazy days at home.

While anime commonly hide mature themes behind a facade of a seemingly fun plot and cast, Zetsubou Sensei is almost apparent in its satirical approach to real-world problems. The show follows a highly pessimistic, suicidal teacher and his equally strange students with quirks of their own. It begins with a sense of dread that never quite leaves until it spills into a culmination of all things you never expected. Each show will make you think, question what is going on, and try to figure out all the hidden meanings in carefully-planned scenes. But here is the catch: all of these were executed in an anime that is, essentially, a comedy.

Scenes will make you laugh, and if you do not think hard enough, then you may end up with quite a massive shock as the series progresses to the final unfolding of events. It plays off genuine human emotions, faults, and mental illnesses as a joke — a direct satire to how society treats those under the same circumstances. If you want to watch a one-of-a-kind dark comedy that will compel you to think and uncover hidden meanings, then Zetsubou Sensei is a must-watch that you should marathon while you can.

There are very few shows that, a decade later, continue to raise questions among fans who have not entirely solved every corner of its mystery. The Melancholy of HaruhiSuzumiya was beyond its time. Still, millions of people watched it without much thought because it was merely an amusing and entertaining show about a group of eccentric friends. But if you look closely enough, then there is an entire philosophical exploration stitched onto dialogue, scenes, and characters.

The series follows the SOS Brigade and their goal to find aliens, espers, and time travellers. But there are plenty more layers to the show that you have to discover yourself, lest you ruin it with spoilers. Its philosophy primarily drabbles in the perception of reality, and while presented in adorable ways, sparks a discourse on morality and consequence. Essentially, it ultimately comes to a choice of an odd but uncertain world or one of normalcy but certainty. If you love delving into the point-of-view of each character and analyzing their internal thoughts, then HaruhiSuzumiya should be on your list to binge this stay-at-home season.

Finding good anime nowadays can be difficult, especially if you love those with compelling plots that allow for deep thought and analyses. Consider shifting your attention to the mid-2000s, which produced some of the most acclaimed psychological thrillers, dark comedies, and time-travelling series that continue to gain traction today.

TOP 10 BEST GAMING SMARTPHONES.
Gaming in this generation is enormous. Most people today play games on their smartphones or laptop, and some even gamble on it. This is because it is so fun and easy to play on one’s smartphone. Mobile gaming has also become so popular due to the always evolving technology. Gaming on the phone has been […]
Opinion - Nikolas Gough

The Future of eCommerce
Ecommerce is a very big industry. So, it’s no big deal that people are constantly asking about what the future holds for eCommerce. In 2019, global eCommerce sales reached almost 3.5 trillion dollars, demonstrating that eCommerce is an undeniably lucrative choice for business organizations. That is huge, and fortunately, it isn’t a new trend. We […]
Opinion - Qasim Shehzad