Wireless charging has been just over the technological horizon for years now, but circumstances have consistently managed to hold it back from reaching the mainstream.

One key issue has been the fragmented marketplace caused by contrasting technologies. Three major companies –  the Alliance for Wireless Power (A4WP),  the Power Matters Alliance (PMA) and the  Wireless Power Consortium (WPC) – have all been competing against one another using incompatible tech.

The landscape has now undergone a dramatic reshaping, as A4WP and PMA have teamed up to help further their own individual causes.

The tradeoff sees A4WP grant PMA their ‘resonant wireless charging’ technology, which allows for multiple devices to be charged simultaneously, whilst PMA will allow A4WP to use their ‘legacy inductive charging’ technology – plus  cloud-based software infrastructure for managing and monetizing charging points.

The CEOs of both companies have been quick to assert that this relationship is not a complete corporate merger.

Whilst the two firms both gain individual technologies from the agreement, the real benefit is the potential gain they make on the current market leaders.

WPC’s Qi technology was the forerunner in the wireless charging game for a long time, but due to the contrasting nature of the three competitors it has been unable to truly seize hold. A4WP and PMA will be hoping that by teaming up they will be able to swing the market in their favour, as the technology gets closer and closer to widespread use.

More Stories
There may be more Nokia Android phones inbound
Yesterday we reported that the Nokia Android phone could be revealed this month. Today we’re hearing that more handsets from the company using Google’s OS could be inbound. Tech.qq has allegedly been tipped that other Androids will follow the phone, including higher-end models. However these new phones will apparently be revealed in May – June, […]
News - Jamie Feltham
Virgin America launches first ever in-flight social network
We’ve all done it, or at least considered it, but Virgin America wants to make in-flight socialising that much easier with the launch of the first onboard social network. Developed with Gogo Wifi and the Here on Biz geo-location app, the service  lets you register via Facebook, LinkedIn or Twitter to contact fellow travellers at […]
News - Saqib Shah
Game BAFTA nominations announced, The Last Of Us leads the way
The nominations for the 2014 Game BAFTA awards has been announced, with Naughty Dog’s The Last Of Us leading the way. The PS3 exclusive racked up 10 seperate nominations, including Best Game and Performer for both Troy Baker and Ashley Johnson’s parts. Grand Theft Auto V follows closely behind with nine nods. Surprisingly, it’s Tearaway […]
News - Jamie Feltham 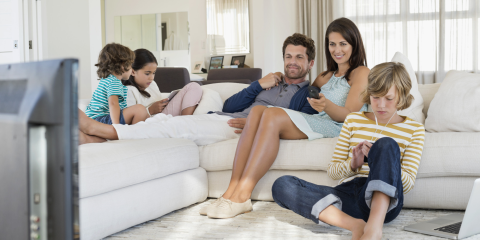 Two-thirds of Americans now own a smartphone
Smartphone uptake in the US continues to rise with 65 percent of all Americans now in possession of at lease one of the devices. According to consumer research firm Nielsen, smartphones are now more common than game consoles (46 percent) and digital cable (54 percent). The figures published in the firm’s most recent Digital Consumer […]
News - Saqib Shah