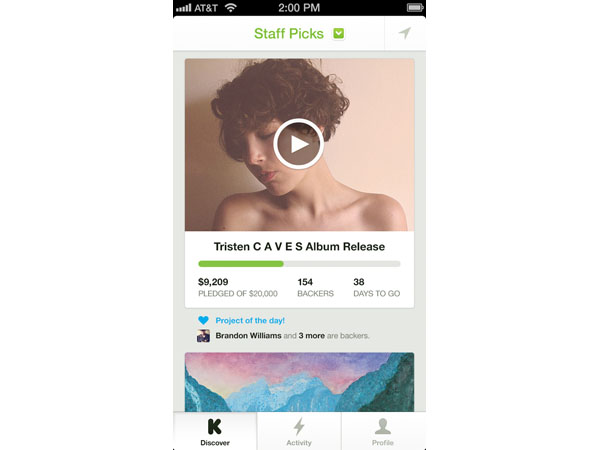 Now you can get your funding on the go, and not in a grab-and-smash kind of way.

The app is a first for Kickstarter and the company has made no mention of an Android equivalent, as yet.

It features redesigned pages and a focus on finding new projects, keeping up to date with backed projects and tools for project creators.

Appropriately, the app is free.

The three main focuses of the app allowed users to browse for projects with their devices, by filters such as category or popularity, as well as using location devices to find nearby projects, Kickstarter said.

For backers, the Activity tab updates on projects and the app notifies users with social media features enabled through Kickstarter to see when friends back or launch projects.

For creators the app notifies when pledges (a promise of funding) occurs, updates on progress with stats and allows pictures and videos to be posted to the app.

Mana from heaven, or random people

If you’re unfamiliar with Kickstarter, it’s a funding platform where people can look for backing for their project without having to sell off shares in a company, or even have a company.   Often rewards are offered for particular funding offers; the higher the offer, the better the reward.

Since its launch in April 2009, the company said more than $US484 million had been pledged by more than 3,4 million people, funding more than 36,000 projects.

Also, bonus fun fact, at least 12 projects had launched objects into space, Kickstarter said, and roughly 10% of the films accepted by the 2012 Sundance, Tribeca, and SXSW film festivals were funded on Kickstarter.

While it’s generally seen as a way to get small projects off the ground, like a short zombie romantic comedy film, Kickstarter has also seen big names launch projects, such as Penny Arcade’s bid to remove all advertisements from their website via Kickstarter backing (with rewards including a ping pong game against Penny Arcade staffers and Tycho and Gabriel (aka Jerry and Mike) crashing your birthday party to eat all your food or being Dungeon Masters for your table top game.)