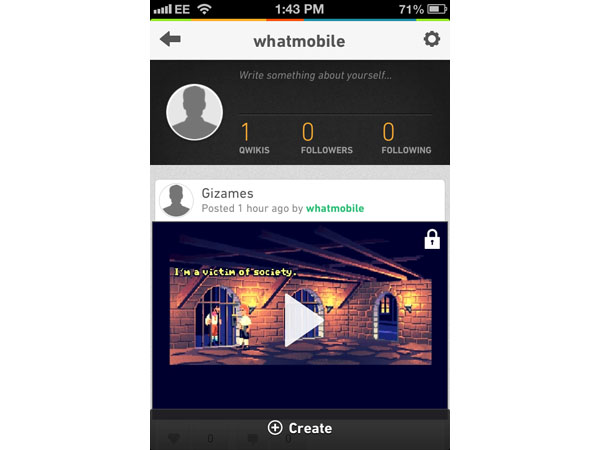 Okay so they’re not Jackson quality movies but it’s still a neat app.

Like Vine, but with photos as well as video, the slightly bizarrely named Qwiki lets you create short slide shows, using pictures and videos from your iPhone, overlaid with a song from your on-board iTunes library.

With the custom setting, you can create your own slide show with pictures and videos you’ve selected, with various design features like scaling pictures and adding effects, choosing where in the song you’d like to start the slide show and adding captions.

With the auto mode, the app will create a slide show for you with a randomly chosen song and a series of photos taken from your device.

There are various sharing options including Facebook, Twitter, email or the option to keep your Qwiki private (…) although doing this doesn’t seem to allow you to edit it further at a later date.

You can post your videos to the Qwiki feed and collect comments, or find videos of a particular genre by searching hash tags, and you can add followers or follow others like Twitter or Google+.

The app is great for short wee movies, but if you’re wanting to see a movie or indeed, get past the first 20 seconds of a song, this is not the app for you.

While it’s an interesting idea to force slide shows/movies to be short, like Twitter’s character limits (can you create an engaging product in say, 15 seconds? The answer, going by some of the Qwiki offerings, is yes. Marketers, pay attention), it’s still frustrating when you want a slower speed then ‘slow’ and a longer lead in.

Having said that, this app doesn’t claim to be video editing software but a LEETLE longer play time would be nice.

All in all, an enjoyable app to play around with some interesting results.

There’s also no option to save your creation to your phone – just on the app.

However what I did like was the option to email your slide show/movie to yourself and then follow the link through to embed your creation (see above). Very neat for tech journos who don’t want to code.

More Stories
App Review: BBC Earth Wonders
What Mobile takes a look at BBC Earth Wonders, the new natural world education app from the BBC
Apps - Alex Walls
App Review: Sound Uncovered, the interactive learning app
What Mobile takes a look at the simply delightful Sound Uncovered, a fascinating app all about the world of sound
Apps - Alex Walls
App Review: Oh No Fractions!
What Mobile takes a look at the free education app, Oh No Fractions! available on Apple iOS
Apps - Alex Walls
December App Reviews
Our selection of some of the best apps released over the past month. By Jon Mundy and Allan Swann The Big Issue Free/£2.49 per issue on Apple iOS Dennis Publishing If you’ve ever walked past a Big Issue seller and regretted it, check out The Big Issue app on iPad. The app is a simple […]
Apps - Allan Swann